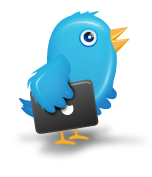 So, now that you’ve gotten a bit familiar with the mechanics of posting on Twitter (from Part 1 and Part 2 in this series), it’s time to learn about a few additional “Twitter Terms.” If you’ve ever wondered what “retweeting” and “hash tags” are, or how to reply to someone else’s tweet, this article is for you.

There is some built-in Twitter functionality that allows you to talk more directly to another Twitter user. The basic is “@reply”, which refers to the way you can respond directly to something someone else has tweeted, or give a public “shout out” to someone specific. The way you can use this is to type in your tweet the “@” symbol directly followed by the twitter username of the person you want to talk to (or about). Here are some different examples of how you could use this.

Replying is a public conversation. Anyone could read the tweet that you send out. If you want to send a private message to someone, which is visible only to them, you can use a “direct message”.

To send a “DM”, put the letter “d” then a space, the username you want to send the message to. Example:

Keep in mind you can only send a direct message to someone who is already following you.

To retweet something, just copy the message and put an “RT” and the “@username” in front. Example:

You can add your own comments to anything you retweet as well.

You don’t need to memorize the different keystrokes for these things, though, since when you are using a twitter interface (whether it’s Twitter.com, TweetDeck, Hootsuite, or any other, there are usually little “Reply, DM, Retweet” buttons associated with each tweet in your stream, and you can just click one of these buttons and the proper data will be copied into the edit box for you to customize and send out.

Adding one or more hashtags to a tweet is a way to categorize the tweet. You can make up hastags on the fly, or use popular ones that others have already created. To add a hashtag, just prefix the keyword with the “#” sign. Example:

There are tons of hashtags in current use. Some are general and others are specific to a certain brand, event, or idea. You can use search.twitter.com to see all the posts for a certain hashtag, and you could even get an RSS feed for a specific hashtag if you wanted to display it on your website, for instance. If you’d like to see an example of a popular hashtag, check out #haiku.

Becoming familiar with the lingo and usage of the built-in twitter features will help you get more out of your tweeting. If you need help setting up your social media and linking it together appropriately, I am now offering a “Social Media Setup & Integration” service. As always, feel free to tweet questions to me @hfloyd.

Heather Floyd is an award-winning independent Umbraco & .Net Developer based in New York and primarily serving North America. She has been involved in website and software development for over 20 years and developing with the Umbraco CMS since 2006. She specializes in information architecture and development efficiency. Heather is also an organizer of the NYC Umbraco Meetup group, an Umbraco MVP, contributor of articles to Skrift and 24 Days, and speaks internationally about Umbraco.

3 Ways to Handle Environment-Specific Data in an Umbraco Site

How to Plan External Data Integrations for Your Umbraco Site

In case you aren't on my email list (or perhaps used to be, but changed companies/email addresses/etc...) I sent th… https://t.co/oraK1fPtlD